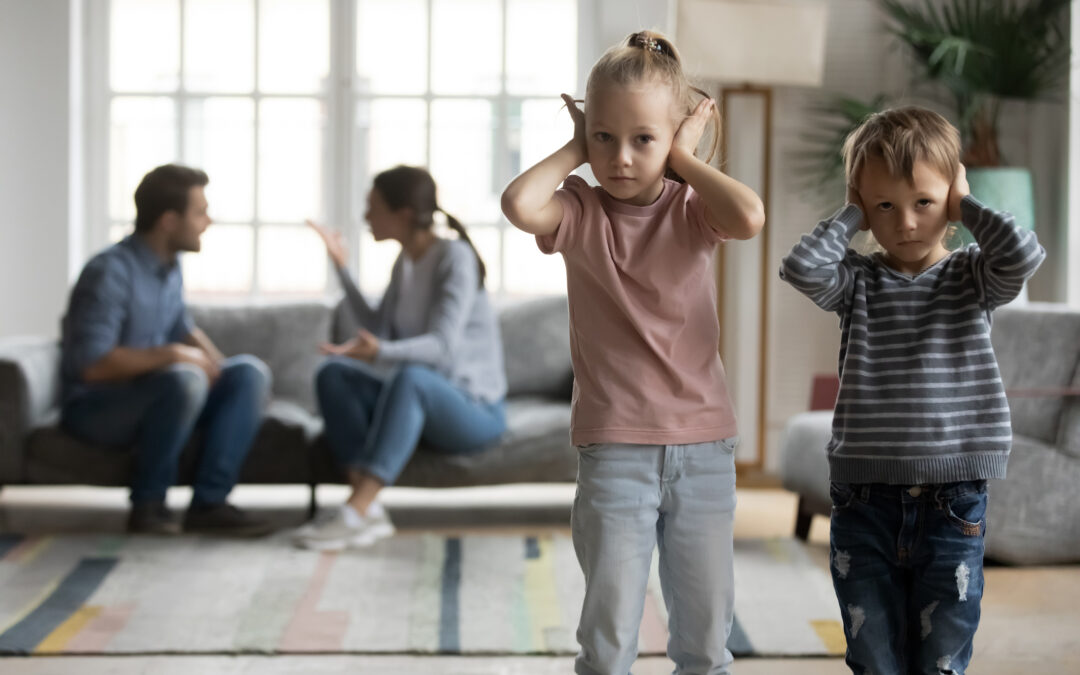 Every couple has fights, it is a natural part of any marriage. How you fight and how you resolve conflict matters. When it comes to fighting in front of your children, how you handle it is going to have an impact on them. A couple can love each other and still have differences when it comes to parenting, getting things done around the house, finances, and more.

Some fights are small and insignificant. Others can explode quickly and get out of control. They can be over topics that don’t get resolved and continue to cause problems within the household. According to experts, explosive fights like that are a form of child abuse. They can cause children to be afraid, to worry about one parent or the other, and even cause feelings of anger.

The mental and physical well-being of a child can be adversely affected when they see their parents fight in such a manner. It can cause them problems growing up and even influence how they handle their relationships as an adult. It may take sessions with a therapist to help someone overcome what they heard and saw as a child if their parents often fought in front of them.

Conflicts happen between parents, but when an effort is made to resolve them in a healthy way, the entire family can benefit. The children see their parents working together and they develop better communication skills. When parents fight in front of children in an unhealthy way, the following negative impacts can result:

Children who see intense fights between their children don’t learn how to problem solve successfully. This can cause them to act aggressively towards others, including their siblings or their peers. Children often model the behaviors of their parents. Witnesses’ violent fights either verbally or physically can cause a child to think such aggressiveness is acceptable when you don’t agree with someone. Such a path can get children into trouble at school, into legal trouble, and make it hard for them to maintain healthy relationships.

Difficulty with their Relationships

Breaking the cycle of such behavior can be difficult without the help of psychotherapy. Children who see their parents fight regularly tend to have those same issues in their relationships. They may be the one fighting in an unhealthy way against their partner. They may choose partners that act in such a way because they think it is normal. Failed relationships can cause someone to put a wall around them and they don’t try to find a partner in the future because they don’t want to get hurt anymore.

Children often blame themselves when there is violence in the home. They suffer from emotional distress. They have to walk on eggshells so they don’t upset anyone in the home. They often worry they did something to cause one or both of their parents to act the way they did. Anxiety and depression can be the result of parents fighting in a home around children. It can trigger a wide range of mental health concerns.

Seeing their parents fight can cause children to struggle with various health issues. Some overeat to help them cope. Obesity can cause diabetes and many other concerns for a child. Others don’t eat enough and that can prevent them from growing properly. Other health concerns can include:

Parents who fight in front of their children can ruin their self-esteem. It can take a long time working with a psychotherapist for them to see their value and worth. A person with poor self-esteem often struggles to make good decisions. They also accept less than they deserve in relationships because they don’t feel they deserve anything better.

A lack of self-esteem can make it hard for someone to pursue their dreams, to achieve goals, or to have a career they desire. They fear failure so they don’t try anything new. Children bottle it up when their parents fight. They tend to feel embarrassed and ashamed by it. When there is physical violence, they often feel helpless. Talking to a psychotherapist can help but the depth of the damage can be hard to reverse.

Children tend to struggle at school when things aren’t well at home. Parents that fight often can prevent them from doing their homework or studying for tests. A lack of sleep can make it hard for them to stay alert in class. Worry about a parent can cause anxiety and stress for them when they are away from home.

Some children act out, and they get violent with other students. They have learned yelling, screaming, and hitting are acceptable and use those as tools to deal with conflict. Other students will withdraw from everyone as they strive to hide what is going on at home behind closed doors.

Adults need to be mindful of the impact fighting in front of children has on them. There can be different signs for children. According to a therapist, it depends on the age of the child and the nature of the fighting. What they hear and what they see can be difficult for them to forget. Years later what they witnessed may be an underlying reason for them to see a psychotherapist.

Parental Awareness is Important when Fighting in Front of a Child

All couples argue, and the children are going to see it from time to time. Be aware of what you say and how you act during those disagreements. It is possible to share how you feel without yelling, throwing things, or physical violence. Such behaviors don’t resolve anything and they can harm your child.

Some rules to follow to fight fair and in a healthy manner include:

Never call each other names or become physically violent. Take time to cool off and then discuss the issue. If tempers flare, it is time to seek professional help. Talking to a counselor alone and as a couple can help you create healthy communication and avoid unhealthy fighting.

Never yell or make threats because you are mad at your spouse. The children can be scared by such behavior. If you can’t talk about the issue right then in a regular tone wait until you can.

When you disagree about a parenting topic, talk about it in private. Don’t discuss the differences of opinion in front of the children. Show a united front when you talk to them. If rules are going to change based on discussions, both parents should be present when they are explained to the children.

Choose your battles wisely, don’t fight over every little thing. Let your children see you showing love, kindness, and patience towards each other. When there are issues, discuss them and move on. Apologize when necessary and accept an apology when it is given. Teach your children by example you can disagree as a couple but work it out and still love each other.

Jousline Savra is an expert specializing in marriage counseling, relationships, and family therapy. As an attachment-based psychotherapist. Jousline is highly experienced in helping adults improve the quality of their lives such as communicating effectively and focusing on their growth and meeting interpersonal goals. When we communicate, our spoken words can originate from deeper issues, carrying enormous power. It’s time to find out what this all means and improve your communication. Communication is the lifeblood of any relationship and is necessary to create and maintain healthy relationships. Call Jousline today and get started on your journey to better relationships.